I can’t let 2019 end without jotting down my thoughts on my own personal favourite games of the last decade. Yes, obviously this list heavily favourites the latter half of the decade and I admit there’s probably a fair bit of recency bias at play. But I also think it’s just a fact that games have gotten better in recent years as more developers try to push the boundaries of what people think video games are capable of. Here are five of my favourites of this decade.

The Legend of Zelda: Breath of the Wild

Let’s get one of the no-brainers out of the way early. Breath of the Wild is a great example of how far video games have come this decade. It’s the pinnacle of an open-world game, giving you the freedom to decide for yourself when you’re ready to face the final boss – you can do it at basically any point you choose to.

The cel-shaded art style is fantastic and means BotW is still going to look great even years down the line. Again, like God of War, BotW was just outright fun to play and got me hooked with engaging gameplay and rewarding progression. I’ll admit the story was extremely weak and that’s something that I feel too many people gloss over when it comes to Zelda. But… It’s all too easy to gloss over that weakness when the rest of the game is just so damn good. This entry in the series truly feels like every other Zelda game has been leading up to this title – an absolute peak in video gaming history and one that will affect the standard other titles are held to in the future. I can’t wait to see how the sequel turns out.

Other games I’ve listed here either had excellent stories, or were a great way of escaping reality for a while. God of War was… The most fun I can remember having playing a game in a long time. The gameplay was SO addictive, with fluid combat and gorgeous graphics to boot. It was also such a smooth, polished experience to go through – the entire game is one ‘take’ with zero blank loading screens from the moment you press start on the introduction screen. I’d say this is the best videogame I’ve played from a technical standpoint, and really shows off what an ‘AAA title’ can achieve.

Like other games in this list, God of War is technically a sequel… But don’t let that deter you. This was my first time with the series and I didn’t really feel lost at any point, so it’s perfectly OK to just jump right in. God of War feels like playing through a Hollywood movie it’s that polished, and is one of the few games my non-gamer partner could watch and not get bored of! I mean that has to count for something, right?

God of War was also the perfect difficulty for me. It was challenging yet achievable, and when it came to optional superbosses I would feel my heart racing and adrenaline pumping as I got closer to finishing them off. If I ever lost, I would know what I could improve upon during my next attempt – no death ever felt unfair or unlucky, and thanks to that it was all the more satisfying when finally defeating certain enemies. I still remember the absolute tension of fighting the Queen of the Valkyries – one of the most stressful, difficult, and enjoyable boss fights I’ve ever played through.

Nier has an awful lot of endings. Twenty-six to be exact. There’s an entry barrier to it when hearing people say you have to complete the game five times in order to see the full story. I’m going to tell you now: first of all, it’s worth it. But second of all, describing it as five playthroughs isn’t exactly right as each playthrough changes so considerably. Better to think of the first five endings as ‘chapters’ with Ending E giving you the story’s ultimate conclusion.

There’s another entry barrier when you find out Nier: Automata is a sequel. But again, don’t worry – you don’t have to have played the previous entries to enjoy or understand it. Automata was my first game in the series and it’s the best videogame experience I’ve had this decade.

SO DON’T LET THOSE TWO THINGS PUT YOU OFF! I never thought I would experience anything close to my childhood experiences with videogames – things like seeing the opening cutscene of Final Fantasy VIII and being blown away, or playing Pokemon Blue on my Gameboy Color and getting completely lost in a fantasy world. Nier: Automata has been the only game to give me a feeling like that in my adult life. The final ending had me at a loss for words and I had goosebumps through the whole thing. Hands down one of the greatest moments I’ve ever had the joy of playing through. 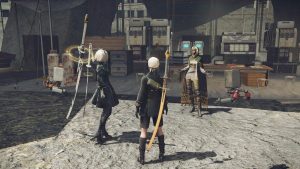 The most concise summary of Automata I can give is that you play as humanoid androids who are fighting against machines that have taken over the Earth. All that’s left of actual humanity has taken refuge on the moon and it’s down to you to eradicate the machines and make Earth hospitable for your creators again. But that’s…. About 5% of the story. Better to go through this on your own.

The gameplay itself, a strange blend of Action RPG and shooter elements, isn’t my normal cup of tea, either. But there’s something Nier just does right, and I couldn’t put it down because I just had to see how everything would turn out. This is a game filled with twists, turns and surprises. There actually came a point where I was anxious to progress in the game because I knew what was about to happen, and I didn’t want to see it play out.

Oh, and the soundtrack is absolutely killer, too.

I never would have thought a game where you run your own farm would become my most-played video game of all time, but here we are. I have racked up hundreds of hours with Stardew Valley across multiple playthroughs on different consoles, and I’m still enjoying it. Originally released in February 2016, Stardew Valley has had a considerable number of updates since it’s release to keep things fresh as well as improving the experiences for new players. The latest update released a few months ago added fishing ponds, new dungeons and a movie theater to the game.

Stardew Valley acts as the ultimate escape. If you’re stressed about anything in life, your farm is waiting for you to take you away from your concerns – and what you do with each day in Stardew Valley is entirely up to you. Do I spend the day talking to the local villagers at the pub and getting to know them better? Or do I spend a morning tending to my farm animals before heading to the beach to do some fishing? Or even head to the desert and risk my life in the depths of the Skull Cavern? There’s an insane amount to keep you occupied in Stardew Valley, and I can only imagine this is how people who enjoy Animal Crossing feel. The art style of Animal Crossing just doesn’t hit the mark for me and stops me from getting fully absorbed into its world, whereas there’s something endearing about the simple sprites you find across Stardew Valley.

I’m still playing this game almost four years later, and I couldn’t recommend it highly enough to anyone. Just one question still perplexes me… Who should I marry in the game – Sam, Sebastian, Harvey…? Even the sewer monster Krobus? Don’t make me choose!!

What Remains of Edith Finch 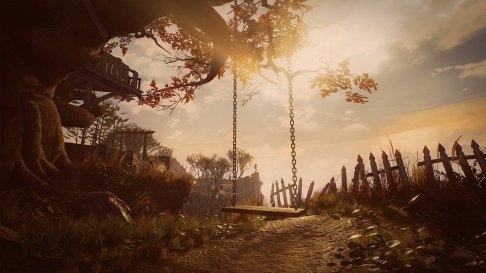 Quite the opposite of Stardew Valley, Edith Finch is a game that I have only ever played through fully once. But that single playthrough had such a lasting impact on me, and it’s an excellent example of why I love video games so much. A good video game can tell you a story that completely captures your imagination and takes you entirely out of reality.

Edith Finch plays like an ‘interactive story’ and sees you slowly uncovering the grim lives, and eventual deaths, of the Finch family. As you progress through the game, you find out how each one of the Finches came to their ultimate demise, and each one is perfectly unique enough to stick with you. The writing is excellent, and more importantly than that the voice acting is great. Too many video game stories can get butchered by awkward voice acting, but thankfully Edith Finch provides a completely polished full package. Explaining any of the deaths themselves would detract from the experience of Edith Finch. This is a game to go in blind knowing as little as possible about it.

It can be finished in a single afternoon much like a movie. Play it, finish it, and then let the story sit with you for a while. It’s safe to say you’ll catch yourself thinking about it longer after the credits roll.

Horizon: Zero Dawn really captured my imagination in 2017 and it was SO much fun running into a pack of legitimately scary mechanical dinosaurs and trying to work out the best tools I had in my arsenal to take them down. Horizon was difficult in all the right ways and so, so rewarding when you managed to take down any of the games fearsome machines.

The Last of Us was a story beautifully told and, much like Breath of the Wild, really had an impact on the standards other video games like it are held to. I’d say The Last of Us had the best voice acting I’ve ever heard in a video game and delivered a really well-written, compelling story that is more accessible than the complex (yet incredible) story told in Nier: Automata. TLoU was, again, an example of what video games can achieve.

Mario Kart 8 Deluxe was… Just an absolute blast to play. I have spent countless nights racing with my closest friends and I’m left with hilarious memories from it that I’ll never forget. Definitely my favourite local multiplayer experience of the decade. Mario Kart strengthens (and destroys) friendships and it’s a great way to bond with people. These days we’re heading more and more towards games that focus on online multiplayer… Mario Kart 8 is a reminder of the fun you can have with good, old-fashioned, local multiplayer.

Video games sure came a long way this decade. And how better to kick off 2020 than with the Final Fantasy VII Remake launching in March next year? I wonder if that will be on my list of favourite titles of the decade in December 2029… But who knows what we’ll be playing at the end of the next decade – maybe FF VII Remake Part 2 if we’re lucky.