The Closed Beta is here, and in-between getting my ass handed to me online, I’ve found time to think about who I want to see in the final product…

The closed beta of Dissidia Final Fantasy NT arrived a few days ago, with fan reaction to some of the gameplay changes from Dissidia 012 being less than stellar – it certainly takes some getting used to the way 3v3 changes the gameplay.

But it’s extremely early days, and a lot can change before the game officially releases in early 2018. I am hoping for a less cluttered HUD (Does the map need to be that big?), better/faster matchmaking, and much more customisation. The introduction of a full 1v1 local/online mode would be amazing. I’m also curious how the single player campaign will play, though I don’t think many of us are too bothered about an in-depth storyline when it comes to a fighting game based around Final Fantasy characters.

I thought I’d use this post to focus on five characters I would love to see in the final release of Dissidia NT. The entire roster of 012 is already confirmed to be returning, and Noctis from XV is obviously going to be a newcomer. So who else would be great to see?

The series most iconic black mage, Vivi would be an excellent addition to our limited roster of magic-based heroes. IX already lacks a third representative character, and Vivi would be a more unique choice than someone like Beatrix or Steiner. His magic-based attacks could include IX’s Doomsday ability, and his EX skill could be taken from his Trance form – Double Black Magic, changing the ways his attacks perform and extending them slightly, perhaps? Not to mention, an alternate costume could recolour him as a classic black mage from FF I, which would be an excellent throwback in a game full of nostalgic references. 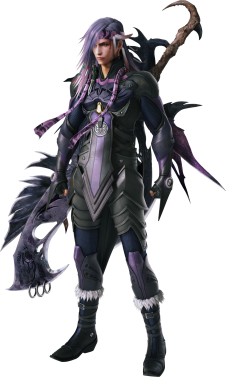 My favourite villain from the series, I think part of me wants Caius to make an appearance if only for his ominous musical theme and his excellent voice actor, Liam O’Brien. He would make for a better, more fitting villain from the XIII series than Barthandelus/Bhunivelze, and could utilise attacks involving Chaos to stop him from being another basic sword-wielder. These Chaos attacks would give him longer range and keep him from feeling like a clone of another villain.

FF XV definitely needs more than one representative as the latest entry in the series, and whilst I understand Ardyn would be an obvious choice being the villain from that game, you have to admit his gameplay would mostly be based around being a slower, heavier version of Noctis. Prompto, on the other hand, would give us another gun user alongside Laguna, and some excellent attacks from his base game like Starshell and Trigger Happy. If any new character feels ‘made’ for Dissidia, it’s Prompto.

In a fighting game full of humans, I’m surprised Red XIII didn’t make it into Dissidia 012. He would be such a unique character based around fast attacks, I almost imagine him playing slightly similar to Zidane. EX Skills based around howls to increase your team stats would be useful, and attacks using his limit breaks from VII like Sled Fang are just so easy to imagine being in the game. I don’t think he’ll actually get in if we’re being realistic, as VII already has Cloud, Tifa and Sephiroth as representatives – but we can dream!

I know, so many fans who want VI to get another character in Dissidia are rooting for Celes or Locke to take the slot. But King Edgar’s moveset would give us something Dissidia hasn’t seen yet by utilising his Tools command. Give him attacks where he can use his chainsaw, crossbow, drill, etc. and you’ve got a character that would be immensely fun to use. Or am I just rooting for him because I want to see him stick a chainsaw into Shantotto?

That’s who I want to see new in Dissidia NT! As for something I think would be amazing but don’t think will actually happen – I’d love to see different characters simply skinned over existing ones in the form of alt costumes. I don’t care if they play exactly the same – it would be fantastic and easy to swap Squall for Seifer, Ultimecia for Edea, Cloud for Zack… Even Tifa for Zell. So many characters could easily overlap, and it would be an excellent way to incorporate more fighters without having to create new movesets.

What do you think? Who would you like to see in the final release, and what are your thoughts on the closed beta so far?