20 years ago today, Buffy Summers first arrived in the Californian town of Sunnydale rejecting her calling to slay vampires and wanting nothing more than to be a normal girl. Over the next seven years, she came to terms with her destiny and made a huge impact on the world of television in the process. Buffy the Vampire Slayer introduced viewers to a modern female heroine who didn’t need to be rescued. It gave us humour, drama, horror, a musical episode and even an emmy-nominated ‘silent’ episode. Now, the show is celebrating its 20th anniversary with a new line of merchandise and lives on in a canonical comic book series currently on season 11. It is my favourite show by a mile, and this post explains why.

The show’s basic template sees Buffy and her friends deal with a different ‘Big Bad’ antagonist each season – with standalone episodes which can easily be watched on their own slowly contributing to an over-arcing storyline for the season. These ‘monster-of-the-week’ episodes often feature monsters acting as symbols for day-to-day issues, and throughout the show we see Buffy face demons and supernatural incidents representing oppressive authority figures, relationship abuse, loneliness, and so on. Nowadays the show is even studied by academics in a field known as Buffy Studies – a biennial conference on the subject known as Slayage is currently looking forward to it’s 8th conference in 2018.

It’s the complex characters that give this series it’s charm and staying power after 20 years – Buffy certainly wasn’t the first or only strong female character on television in the 90s, but she was one of the most memorable. She was tough, smart, honest, and even though she was this over-powered super hero, she also had imperfections which kept her real.

It’s not just her – all of the characters have their own unique personalities and flaws. Buffy often has a superiority complex, Willow struggles with power abuse and acts on impulsive desires, Xander is selfish and jealous, Cordelia is self-centered… What’s great is seeing all of these characters deal with their issues, making mistakes and learning as the show goes on. The Willow you meet in Season 1, a geeky high-schooler curious about magic, goes on to abuse her power and eventually conquer it over the span of seven years. Likewise, Cordelia’s unapologetically bitchy character undergoes a slow transformation throughout three seasons of Buffy and five seasons of spin-off show Angel, eventually becoming one of the most selfless characters in the series. Throughout all of this, you never really ‘lose’ the characters – they evolve but never become caricatures of themselves. 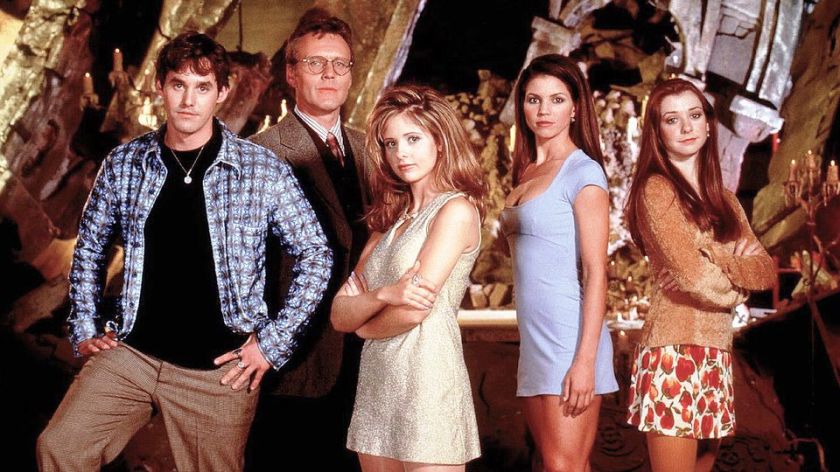 Often dismissed by people as a camp and cringe-worthy series, what lots of people miss is how tongue-in-cheek and self-aware Buffy is, frequently poking fun at itself and referencing the amount of supernatural activity seen in Sunnydale. See this quote from high school student Jonathan during Buffy’s prom awards ceremony:

“We don’t talk about it much, but it’s no secret that Sunnydale High isn’t really like other high schools. A lot of weird stuff happens here. But whenever there was a problem or something creepy happened, you seemed to show up and stop it. Most of the people here have been saved by you or helped by you at one time or another. We’re proud to say that the class of ’99 has the lowest mortality rate of any graduating class in Sunnydale history, and we know at least part of that is because of you.”

Don’t get me wrong, it is definitely very camp and cringe-worthy at times. But it’s often intentional, and its done with a sense of fun that makes it easy to enjoy. The special effects can be laughable and the werewolf costumes look like something you’d buy on eBay. But the show also has hilarious moments, harrowing dramatic scenes, and some genuinely scary episodes – like scenes in Hush featuring these guys known as The Gentlemen, who steal your voice and kill you while you can’t scream:

On the flip side, you also have antagonistic vampire Spike threatening to attack Buffy’s mother here:

This mix of genres and tones means that there’s an episode to be watched for every situation, and when things were ever getting stressful in my own life I could flick on a relevant episode and see characters I loved dealing with their own issues and coming out the other side stronger for it. Episodes like Family tell us family is more than just who your blood-kin is, Potential hammers home the message of everyone having skills even if you don’t have superpowers, The Body deals with the immediate aftermath of the death of a loved one… Buffy is comforting viewing for me when I need it most, with different episodes lending themselves more to comedy, drama, or horror.

What’s most satisfying is the fact that every time I watch it, I notice my opinions change – characters I found irritating my first-time around (Dawn) I now find hilarious. The cast has such a wide range of complicated personalities that there is good and bad to be found in everyone – I originally loved Xander, but in my latest re-watch I found him irritating and I’ve warmed more to Willow’s humour and storylines.

If you’re thinking of watching the series for the first time, know that season 1 is rough – you have to push through a low-budget opening year while the show finds its footing, embrace the awkward monster costumes, cringe-worthy fashion choices and take everything with a pinch of salt. After that, you’re in for one of the most satisfying television experiences you’ll ever come across.

Buffy is one of the only shows I can happily watch over and over, whether that be a full re-watch or just sticking on my favourite episodes at the end of a rough day. It’s smart, it’s entertaining, it’s escapism – and ultimately that’s what good TV is all about.

If you’ve never tried Buffy before and are curious, I’d urge you to find ‘Hush‘ and give it 40 minutes to impress you. If you’ve seen the show already – let me know your thoughts on it in the comments below! What do you think common misconceptions of the show are, and where do you think they come from? What made the show stand out to you, and do any others come close? I’ll be celebrating the anniversary by watching the series finale again tonight…