This book had the best opening so far, but didn’t quite deliver what I expected it to. I still enjoyed it, and can’t wait to see how everything pans out, but I would have liked to focus on things other than love potions and Draco for huge chunks of the Half-Blood Prince. That doesn’t take away how awesome the Voldemort memories were though!

Seeing the Prime Minister talk with a new Minister of Magic (who I liked way more than Cornelius Fudge) was an excellent intro and way of mixing the magical and muggle worlds. I thought we might be in for more magical antics in London, and would’ve been excited to see that, so was disappointed when that side of things was pretty much forgotten about. Similarly, I really liked Narcissa and Bellatrix in the opening of the book when they spoke with Snape re: Generic Evil Scheme #27. The Death Eaters are all SO interesting; I want to know so much more about them all – especially Fenrir Greyback, who is terrifying. Never thought I’d see a cannibal in this series! Narcissa is as satisfying to read about as Lucius, and at one point I thought she was going to break her husband out of prison. Where did these two scary women go for the rest of the book? They vanished, and I was gutted! I was hoping to run into them when the Death Eaters attacked Hogwarts, but nope. These two, alongside Lupin, were characters that I wanted to see more of and was disappointed they didn’t play a more important role in the book.

I still love the Weasleys. Their family clock pointing at ‘Mortal Peril’ for everyone made my heart sink, although thankfully nothing came to pass from that (Yet…). Bill’s eventual facial injury gave me flashbacks of Xander getting his eye poked out in Buffy and man did I feel for him! It was interesting to see Fleur back again, and she grew on me when she stood by Bill after his injury. Is it just me who thinks Rowling is constantly teasing that something is going to happen to the Weasleys? You’re keeping me on edge, woman!

Liquid Luck was another awesome concept like the Boggart and Thestrals – that section with lucky Harry having everything go right for him was brilliant. A concept I didn’t enjoy as much was the love potion stuff. I’ll admit this book was genuinely funny at times, but I’m not interested in the romance in this series and I’m glad it’s generally-speaking been more of a background thing. I felt like Ron & Hermione suddenly fancied each other rather quickly, and whilst they make a nice pair I think Hermione could find someone who has a track record of treating her better.

Likewise, Harry falling for Ginny was sweet, and nicely done, but ultimately I don’t really care about their relationship. For them to split up at the end seemed a bit silly – surely Voldemort knows who Harry cares about regardless of if they’re ‘official’ or not. More magic, less soppy stuff please!

The best thing in the Half-Blood Prince was reading the memories of Voldemort’s past – it felt like an episode of This Is Your Life. Tom Riddle was so evil, cold and calculating, I loved him! I could easily read Voldemort’s entire autobiography. I can see it now: ‘Riddle Me This: Voldemort’s Story’ (boyfriend came up with that doozey of a title). At one point my theory started coming back that Salazar Slytherin was either alive or going to be resurrected, but I guess not. If I’d been writing these books I may have taken the storyline in that direction! 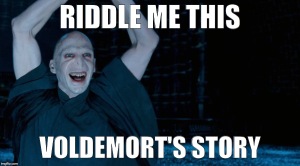 Horcruxes were just fascinating. They’re a really interesting concept and finally explain why Voldemort is more stubborn than a cockroach. Splitting his soul into seven parts? He really is a bad egg eh! I loved the link to the previous books, with the diary being a Horcrux, though I think they’re jumping the gun a bit assuming Nagini the snake is a Horcrux? Fair enough if it’s right, but it’s a bit of a lucky guess on Dumbledore’s part. It’s nice knowing exactly what the mission is going to be in the final book though! Also, I couldn’t believe it turned out the locket wasn’t a Horcrux after all. That gave me such a sinking feeling, much like Harry finding the mirror that Sirius gave him at the end of the last book. It’s a real kick-in-the-teeth that the characters go through such hardship for no results. Who on earth is R.A.B and what have they done with the real Horcrux?!

I was disappointed with the Half-Blood Prince storyline itself. It went nowhere? There was no importance besides making Harry good at potions, it seems. He was just reading an old book of Snape’s, no big deal at all. I thought it would turn out to be Harry’s dad writing in the book and would contain some kind of revelation about Lily.

I blitzed through the last third of the book in a day. Harry and Dumbledore heading off on their own adventure was exciting and the Inferi were terrifying. Did Dumbledore’s withering hand remind anybody else of this guy from Scary Movie 2?

The Dark Mark appearing above Hogwarts was crazy ominous, and when Dumbledore paralysed Harry atop the tower I knew something bad was about to happen. I’m so relieved Draco wasn’t the one to kill Dumbledore. Not only does he clearly not have it in him, it wouldn’t have felt justified either. He had a golden moment in this book when he attacked Harry on the Hogwarts Express, which was the first time I’ve liked Draco as he finally seemed like a threat. But when it came to killing someone he proved he was exactly what I thought – all bark and no bite! I think Draco wants power he’s just not cut out for, and needs to put the super villain dream to rest and consider a career in retail.

But someone did kill Dumbledore… Snape – you idiot!!! My first thought when it happened was ‘great, now Harry’s definitely screwed.’ Dumbledore always seemed to know what was going on and how to fix everything, now there’s no one to fill that position of all-knowing problem solver and ultimate agony aunt! I couldn’t decide whether to trust Snape or not throughout the book, though I have written in my notes that, ‘Snape’s the Dark Arts teacher now – clearly evil then!’ I thought him and Draco’s pact was to kill Harry (wrong!), but when he pulled the old Abra-Kadabra on Dumbledore it felt fitting that if anyone’s going to commit a surprise murder, it would be Snape. I’ve always been cautious of him, and rightly so! The slippery little weasel.

Looking back at it now I’ve finished the book, it makes sense that if someone was going to die it had to be Dumbledore. His death gives Harry more motivation to kill Voldemort, and passes the torch on to him for him to make his own plans and take initiative a little more. I’ll miss you Dumbledore, you made for some amazing moments and always seemed to have a plan up your sleeve!

“It is the unknown we fear when we look upon death and darkness. Nothing more.” – Dumbledore

I was worried other characters were at risk of dying, and am pretty surprised no one else was killed off, like some of the minor characters like Seamus Finnigan or Dean Thomas. I also thought for a second Neville might bite the dust at the hands of Bellatrix, but was massively relieved that didn’t happen. Speaking of Neville, him and Luna having a conversation together after the battle made me realise what a nice couple they’d make, or at least great friends! They’re both such lonely people, they work well together and I really want to see more of them.

Looking to the final book, I. AM. SO. EXCITED. I can’t wait to see Mcgonagall as a head teacher (assuming Hogwarts opens again) and I’m dying to know how everything comes together. As for my theories for the final book? Harry will obviously defeat Voldemort. I hope Neville kills Bellatrix, though I also think there’s a chance she might kill him, which would be devastating but epic. I still think one of the Weasleys is going to meet their end, but will be very happy if they all make it out OK. I reckon Ron and Hermione are safe, as are Ginny and Harry, and I hope Luna doesn’t die! Oh I can’t wait!

Overall I enjoyed the Order of the Phoenix more, but this book certainly set us up for an awesome finale. The highs in the Half-Blood prince were made up of the Voldemort-centric memories and information on where his immortality comes from, whilst the lows were the focus on romance and spending a huge amount of time tailing Malfoy.

I’m liking Voldemort, Luna Lovegood, and the Weasleys. I’m still not bothered about Hagrid, Draco, and Snape. I can’t wait to finish the series now! I feel like the last book is going to move extremely fast…

My (rhetorical) questions are:

Questions for you are:

7 thoughts on “The Half-Blood Prince REVIEW”